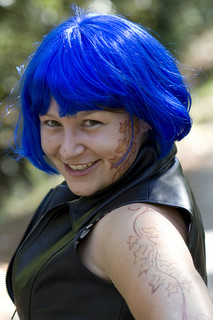 Former Government: Elective Monarchy with Technocratic leanings
Former Rulers: Hydra (a party comprised of 3 married females)
Former Planet: Lethe
Primary Eclipse Settlement: Elder’s Grove
Cybernetics: Unheard of
Psionics: Common
Mutations: Rare, Shunned
Make-up Requirement: Heavy veins and highlights on the face that change color with the season of the planet they inhabit. In some cases even the hair color changes with the season. Plant growth or flowering in the hair is considered a marring cosmetic mutation by some factions of Yazatas, while others find it beauteous and a sign of maturity, bringing them closer to their beloved Elders.
Genetic Advantage: Photosynthesize – Due to the nature of Yazatas physiology they heal faster in sunlight. Yazatas gain the Advantage: Rapid Healing between sunrise and sunset. See Advantages & Disadvantages for more information about Rapid Healing.
Genetic Advantage: Technically Inclined – Yazatas gain +1 to their level of Mech Tech Expertise or Energy Tech Expertise, if they have purchased at least one level. They only gain this bonus for one skill.
Genetic Disadvantage: Diminished Healing (Drugs) – Due to the nature of Yazatas physiology they are more resistant to certain drugs. All Yazatas start with the Disadvantage: Diminished Healing- Drugs. For more information on Diminished Healing, see Advantages & Disadvantages. They do not receive points for this disadvantage.

Yazatas are chlorophyll-based life forms. Ironically, their love of the natural world is only rivaled by their curiosity for technology and most religious Yazata tend to worship the Tribe’s god of technology known as Sedu. As the foremost manufacturers and scientists of the Tribes, most technology carried by Tribe members was developed and built by Yazatas artisans. Their skill at terraforming was quite unrivaled throughout their former galaxy. These beings are inquisitive and well known for pushing buttons that should never be pushed. Many are also natural pranksters up until their aging years before transforming into an Ancient. Elderhood is a time in a Yazatas life when they actively take root in the soil, growing into a great tree, and remaining in place for thousands of years as a grove of ever-living knowledge and guidance to their people; reliable, wise, and unmoving.

Most Yazata prefer to wear utilitarian clothing with lots of pockets so that they have places to store their tools and gadgets. If formal clothing is called for, a Yazata will wear their cleanest utility clothing or possibly a nice dress or suit. The main focus for clothing should be upon pockets, rugged construction, and ease of cleaning. Multi-pocketed vests have recently come into fashion. When thinking of costuming ideas look into safari or hunting clothing, garments worn by scientific professionals, and even mechanic coveralls. Many of this Tribe like to supplement their looks with something that is an homage back to their plant-like nature; some sporting the bright colors of exotic flowers while others tend towards the subtle shades of the forest.

When the Thinking Machine invasion began, there was some disorganized behavior as factions within the Yazata culture vied for leadership of their Tribe. The Yazatas had been devastated in the year previous to the invasion by a terrorist attack to their beloved Grove of Ancients; a city-sized grove of trees who are actually impossibly old Yazata elders. Countless elders were killed in the attack, leaving the planet in shock. After a short dispute, a collective trio of Yazata females known as “Hydra” stepped forward to run for office as leaders of their Tribe. With the support of the Ancients themselves, Hydra won by a landslide. With Hydra’s ascension, the Yazatas took arguably the most active role in the Machine War, providing countless supplies and munitions to any and all factions that needed them to fight the enemies of the galaxy.

With Middian’s relocation, most of the Yazata still on the planet reside in the settlement of Elder’s Grove. The name of the settlement can be attributed to the Tribe, in fact. It is their Elders who have taken root, quite literally, at the heart of the district the Yazata occupy. There, they happily occupy themselves with the invention of the latest technology for living on Middian as well as the joyous worship of their god Sedu.