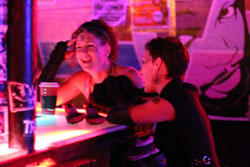 This is the location at which it was all said to have gone down when the robot armies of XII tried to wrest control of the planet and end all human existence. Considered a major hub of communications and now a historical landmark, this Station makes for an active waypoint in most journeys be they diplomatic or adventurous in nature.

Gate Town is considered the first colony of Eclipse. It was the touch-down point for first contact with the planet, hosting an MK III sized Gate of unusual properties never before seen on a Gate previously. The colony consists of two large residential barracks, a mess hall, a medical quarter, and a research station. A few hours outside of town lies the settlement known as The Compound.

A second Gate mysteriously appeared on the planet’s surface the year before the robot invasion, creating a never before seen Gate duality on the planet. No planet has ever hosted more than one Gate before and the anomaly has not gone unnoticed. However, it is said that the town is uninhabitable due to the strong empathic vibrations that echo throughout the abandoned structures.

A popular bar seated on a solitary asteroid. At the end of the year 162 AGW, the asteroid began to come to life, and the deep underbelly of the bar’s structure began to resonate with technological energies long forgotten. The Floating Vagabond would come to seemingly pilot itself across space to where it now rests, orbiting around the atmosphere of Eclipse. It hosts a crew of around 50 – 200 at any time including technicians, barmaids, and a few squatters as well as the “owner” of the bar – a popular retired Pit Fighter by the name Turk the Tiger.

There are times when the PCs will find themselves traveling to other less-visited areas with infrequency based on the actions of the characters themselves. This could include way stations, other planets, or even technological hubs. Because they are not commonly reoccurring, they will not be listed here. If the characters will be visiting one of these uncommon places for a game gathering location, it will be announced on the Forums in the weeks prior to game.