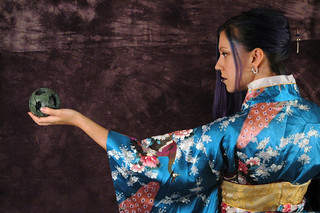 At first appearance, the Meurlain seem to be a faith based esoteric order of philosophers and scholars seeking enlightenment through deep meditation and ritual. In fact, they are not just spiritualists but physicists and scientists as well. They believe the universe and everything within it are bound together by a universal energy called Shiak’tian. It is believed that the furthering of mental discipline along with scientific study makes one closer to this universal energy, thus ensuring rebirth and eventual enlightenment. This belief is based on not only faith but on quantum mechanics and entanglement theory; everything and everyone is interconnected on a subatomic level. Energy is eternal and consciousness and observation fundamentally alter reality.

The Meurlain are also very adept at Psionics and many are either Ba’Tul or Ka’Tul wielders. Meurlain typically dress in robes and tunics from the simple to the ornate with broad leather belts or woven sashes from which to hang their finely wrought weaponry. The Meurlain do not take to violence lightly. They do not take to violence lightly, but they also accept that fighting and suffering are part of the world. To deny or ignore either is to deny existence.

These monkish scientists occupied a strange place within galactic politics before the move of Eclipse. Their zen-philosophical natures and general apathy towards politics made them ideal negotiators and impartial adjudicators. Their mastery of the Web Gates made them needed to maintain trade and alliances due to the fact that no other culture in the known galaxy breeds as many children with an affinity for the Ways. As a result, the Meurlain rarely needed to maintain their independence with military might. It was not wise to attack those who maintained your roads.

They were active in the civil disputes of the Empire in the years before the Machine invasion, taking sides in the conflict in a way they had never done before. This unprecedented choice led to much chaos and confusion in turn when Meurlain Web Guides began being forbidden to assist in charges their nation was not allied with. When the Thinking Machine invasion began, governments toppled and the Meurlain were turned upside down as members of their ruling council began being declared dead, traitors, or worse. This shaky ground prevented the Meurlain as a whole from participating much in the war once they had wrested the situation into a controlled state.

Many of the Meurlain did make it to Eclipse though, politics aside. Some came to research the unusual findings there while others came with the intent to make a difference in the outcome of the war despite the lack of strong participation within their nation.