There are many more races that call Eclipse home. Here are a few of the more well-known ones. 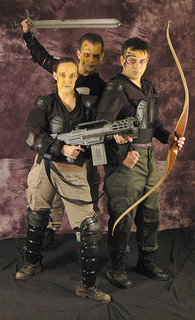 Originally of the Origo galaxy, the Aeshma are a very proud and aggressive race. They were once the bulk of the Tribes warriors, and are unique in the fact that of the many Tribes of Origo, they are almost entirely atheists. This non-belief in an afterlife was one reason why they turned so many their dead over to the Nasu and held no rituals for the fallen. They are a very unique people all in all, for each Aeshma is actually made up of many different organisms living together for mutual benefit. Each organ and system in the Aeshma body is a separate entity with a unique genetic structure. The nervous system is the only organ capable of higher thought and it acts as the voice and “leader” of the body. You can always tell an Aeshma when you meet one by the sallow color of their skin accompanying their blue lips and red rimmed eyes. They also always refer to themselves in the third person (we, us etc.), never as individuals. It is unknown how many Aeshma made it to Eclipse prior to the planet’s move, but they have been seen from time to time among the settlements; rarely as residents, however.

The ruling lords of the Dyzanites, the Ahramnhi are of an indeterminable age and rumored to be immortal. They originally appeared on Eclipse in the year 169AGW. The Ahramnhi waged war on the Origo galaxy for many years thereafter, leading up into the months just before the Battle of Middian when one of the Ahramnhi by the name of Lord Jastor came forward to parlay with the residents of Gate Town. A tentative treaty was signed with Jastor and he and his Dyzanites were allowed residency in the settlement known as White Falls. The settlement’s rise as a major location of note is attributed in part to Jastor’s efforts there prior to the Battle of Middian. He is, to date, the only Ahramnhi lord to coexist peaceably with the former residents of Origo, though his relationship is a tenuous one to be sure. It is unknown how many of the original Ahramnhi rulers made it to Eclipse prior to the planet’s move, but there is at least one other of some notoriety known as Prince Arioch. There are only rumors as to the rest. 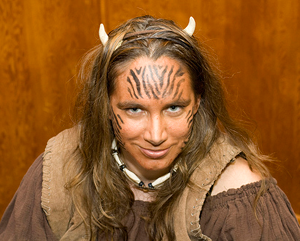 No one is quite sure where this hunter culture came from originally, and all they will say of their origins is that they traveled to Eclipse from beyond a place they refer to as “the Silver Gate.” Even more nomadic than Suzaki, Feralki tend to live among the wild woods of Eclipse and rarely take to the roads except to follow the trail of their prey. They are known to have an avid hatred of Marauders, and will pursue a mobile pack of the Nidregg-worshipping cultists with unrivaled determination even at great strain to their personal resources. You will recognize a Feralki by their cat-like appearance and horns, similar to Dahhak. All Feralki are taught to use the bow from a young age, and many are master marksmen worthy of a Gunsel’s admiration.