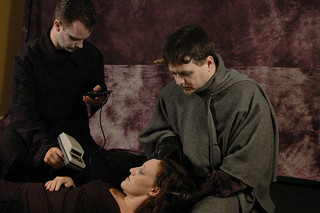 Former Government: Geniocratic Council with a Theocratic Council Leader
Former Ruler: the Voice of Tishtyra
Former Planet: Neith
Primary Eclipse Settlement: Downings
Cybernetics: Unheard of
Psionics: Common, particularly Ba’Tul
Mutations: Rare
Make-up Requirement: Player should appear corpse-like with pale skin and dark circles under the eyes
Genetic Advantage: Medical Knowledge – The Nasu are naturally inclined to the functions of the body, as such they receive +1 to their level of Med Tech Expertise if they have purchased at least 1 level of Med Tech Expertise.
Genetic Advantage: Pain Resistance – Nasu players start with the Advantage: Pain Resistance. See Advantages & Disadvantages for more information about Pain Resistance.
Genetic Disadvantage: Pacifist – At the genetic level, the Nasu are opposed to taking life.Attempting to use a Killing Blow or other killing effect on a sentient being will cause the Nasu to go into System Shock (and the Killing Blow or killing effect will fail to be completed). Accidentally using a killing effect on a sentient beings will cause them to go into System Shock. Nasu may injure sentient beings (though most choose not to), and may even allow them to bleed to death. The Genetic Disadvantage only triggers when directly using or attempting to use a killing effect on another sentient being.

Nasu are small, slug-like symbiotic creatures that can inhabit and animate the corpses of larger life forms. They are born in the sea as naturally aquatic beings eating plankton and algae. Regardless of their host body, they hold great affinity for water all throughout their life. Nasu mature at a similar rate to humans, coming of age after about 12 years. At this time they are able to physically inhabit and animate corpses. Many of the Tribes distrust the Nasu because of this, believing that they kill superior specimens to inhabit their bodies. This fear could not be farther from the truth as Nasu are pacifists at their genetic level, lacking any desire to kill save for a few rare exceptions. They are typically vegetarians in their natural state, but will commonly eat lower life forms to nourish their inhabited hosts when they have one. Reinforced by their religious beliefs, Nasu strive to never kill another sentient being. It is common for a member of this Tribe to devote themselves to furthering peace and health in the galaxy throughout their life.

Nasu tend to favor long coats and deep hoods. Materials that tend not to rot or mildew are often used as well. Fashion tends towards slick, shiny clothing made of synthetic materials and vinyls. They find the patterns of light to be more pleasing than colors. They also tend to like clothing that sparkles or flashes, it gets attention and reminds them of the surface of the oceans in their original home world.

During the invasion of the Thinking Machines, the Nasu took the lead on harboring refugees and actively sending healers and supplies to the war fronts. Many actively relocated to Eclipse knowing that it would bear the weight of the final battle with the Machines and wishing to help where they could. They have predominantly taken up residence in the settlement of Downings for the prominent shrine to Tishtyra (their goddess of choice) that exists there as well as the large demand for healers within.