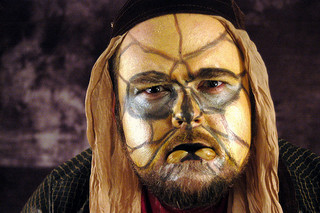 Former Government: Diarchy with Uniocracy themes present
Former Rulers: The Warlord and the Queen
Former Planet: Trita
Primary Eclipse Settlement: Morgan’s Landing
Cybernetics: None, all Tribes are incompatible with cybernetics
Psionics: Common
Mutations: Rare
Make-up Requirement: Players are required to have heavy geometric lines on their face with brown or tan highlights, and slicked back hair or no hair at all, to emulate a shell or carapace.
Genetic Advantage: Market Value – Midir may appraise items and know the value of them as if they had Profession: Merchant.
Genetic Advantage: Natural Talent – Midir who purchase a Profession skill gain +1 to the level of the skill for determining how much money they make with that Profession.
Genetic Disadvantage: Weak Will: Due to the nature of Midir physiology they are more susceptible to Mental Effects. All Midir start with the Disadvantage: Weak Will. See Advantages and Disadvantages for more information about Weak Will. They do not receive points for this disadvantage.

The Midir are a Tribe who once considered the planet Trita their home. When the Thinking Machines invaded and took from them their entire culture, only a select few survived – those who had gone off-world at the command of their leaders. The remaining Midir have a keen oral history and recall the stories of their people with stunning clarity. Survival has long dominated their culture, but never so much as now. The limited resources of their frontier life have necessitated a frugal use of what energies and materials they have left in stock. Their struggles during the Thinking Machine invasion mandated a thorough comprehension of martial combat that continues throughout their day to day life on Middian, marking them as an emerging Tribe of efficient and hardy warriors.

Midir fashion tends towards the utilitarian paired with light scarves that can be used in a variety of ways heralding back to their desert lives on Trita. The more merchant-minded of this Tribe still lean towards the traditional fashions brought from Origo of fine silks and linens with some ornamentation.

In the year 162 AGW, the invasion of the Thinking Machines began. The planet Trita was the first to fall, and to many it was curious was that the Midir seemed to anticipate it. The race largely sacrificed themselves and their home planet to buy the galaxy more time to become aware and accept the circumstances. No Midir who were on Trita at the time of the invasion are known to have evacuated, resulting in a diminishment of the Midir race as a whole. Only those who were off-world survive to this day to represent this noble race.

The Midir made a strong showing at the Battle of Middian for Morgan’s Landing, and their bravery has not gone unremarked since in the areas near there. Though their objectives seem heavily based in the survival of both their group and their chosen settlement, the Midir still hold a keen eye for the market. Many merchants who now brave the roads between settlements are largely Midir and some keep company with the Suzaki convoys that courier along beside them.