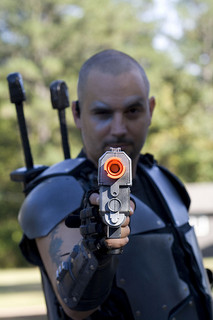 Kshathrans are silicon-based beings, stoic and strong. They have metallic skin and hair, and are very dense and stoutly built; a quality they owe to the gravity-rich environment of Vairya. This Tribe is no stranger to hard work, and most Kshathra have some degree of craft skill. Many are hereditary warriors, giving tribute to their ancestors by carrying on in the professions of their families for generations at a time.

Kshathrans excel with heavier weapons such as the mace, club, or bastard sword, and usually supplement their naturally resistant silicate forms with heavy armor plating. Their dress tends to be accommodating to whatever armor they choose to wear, favoring darker, richer colors found in the earth and stone. 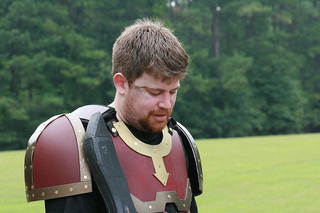 Two centuries ago, they were the slaves of the Dahhak, but they revolted against their oppressors. In a single night they overtook the Dahhak home world, forcing the slavers to fall back to a distant outpost. The warrior known as Keresaspa, who since has been afforded almost god-like status, led the revolt. It is said that at the end of his life he did not die, but instead turned himself to stone to wait for the day that his people would need him the most; awaking only to complete his destiny and destroy the Dahhak, heralding the end of time.

In the year 162 AGW, Keresaspa did awaken when a warship of the Thinking Machines (aptly named a “World Destroyer”) began attacking Vairya from the atmosphere of the planet. On that day he sprang to life, destroying the ship and scattering it to scrap in the sky. The falling debris of the warship caused heavy damage to the Gate city of Vairya, but no sign of Keresaspa himself was uncovered. Vairya was the only planet to have survived such an attack outside of Eclipse itself.

Many Kshathran came to Eclipse to bolster the defenses there when it came time for the Battle of Middian. The largest concentration of the race live in Downings where they corner the market on a quiet life of hard work and discipline among the lively and often raucous Fringers.