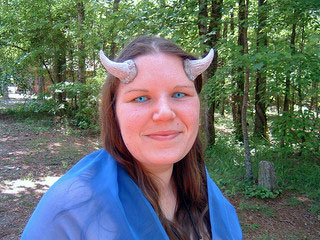 Were it not for the horns, a Dahhak would appear almost human. Commonly, most have only one set of horns, but it is not unheard of to see many variations and stable mutations with several horns, fangs, and other strange features. These Dahhak are often seen as gifted and are usually set a prominent place within their society. 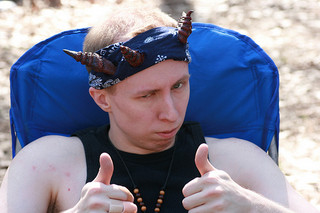 This Tribe is often seen as underhanded, loving the life of the wheel and deal. They are not the accomplished merchants that the Midir are, though they do excel in crafting and are known to be slavers. In history, the Dahhak were the masters of the Kshathra until about 200 years ago when the Kshathra revolted against them, stealing their sacred home world Vairya in what is now called the “Night of the Betrayer.” The Dahhak have never quite gotten over this and, until recently, held an unbearable hatred toward the Kshathra. It was only over the course of the past few years that the two races began work in earnest to put the past behind them work to together in the face of the Thinking Machine invasion. Now that the war is over, there’s no telling how the two will continue to behave around each other.

Dahhak favor bladed weapons and many follow the tenets of the Kataya Martial Discipline. They generally dress as finely as their finances will allow, favoring tailed coats and jerkins (sometimes brocaded) paired with light, loose pants in a variety of colors. They strive to reach an ideal balance between distinguished fashion and fighting functionality.

During the war, the Dahhak set off a massive explosive device on their own home world of Asha to prevent the advance of the Machine armies and buy the rest of the galaxy more time to prepare. This selfless act completely changed the majority of the galaxy’s opinion of the race. Where before they had seemed self-serving and elitist, Dahhak now became respected veterans of the war effort. Slavery and old hatreds were put aside at the magnitude of their sacrifice. This act earned them an welcomed place in the settlements of both Morgan’s Landing and the Compound, and even a measured respect from some Kshathrans.