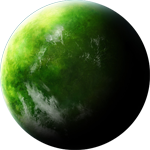 Once known for its rolling plains and savannas, Ogun was the spiritual seat of power for the Meurlain. The weather ranged from pleasant, light winds to violent storms generated over the vast expanses of flat terrain unbroken by major mountain ranges. The settlements there were rarely visited by non-Meurlain. Ogun was sacred to all Meulain and there were several temples dedicated to the study of Ba’Tul and Ka’Tul, as well as for the study of the physical sciences.

Patala as a whole was covered by mountainous terrain and for most of its short year was bitterly cold. To make things even more difficult, the Web Gate was miles below the main temple – known as The Temple of the Constant. While the villagers and the acolytes were all quite friendly, it was well known that the planet and especially the Temple were off limits to outsiders except through rarely issued permits. 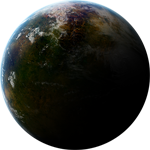 Ushas, along with its twenty-three siblings, orbited around a huge gas giant. Of the all the moons, Ushas was the largest, possessing an atmosphere capable of supporting carbon-based, oxygen-breathing life. It was often dark, or in perpetual twilight due to the proximity to its parent planet. Despite the lack of direct light from the system primary, Ushas was warm and tropical with strange, nocturnal-blooming flora. The tidal forces acting upon Ushas kept the moon warm through tectonic activity.