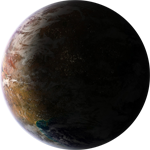 Discovered (or some say, rediscovered) in the year 157 AGW. The planet was so named for the engraving found on the side of the first piece of archeotech removed from the surface. The Tribes refer to the planet as Middian in reference to their religious beliefs that the planet is the resting place of the mind of the sleeping god Kenshu. It is a large planet made up of multiple continents, several large bodies of water, and contains two MK.III gates (the only planet known to have multiple gates).

In the years leading up to the final battle with the Thinking Machines, people who came to live in the main settlements of Eclipse found they had a tendency to work together, despite mutations, cybernetics, or psionic histories. There were simply too many other things on the planet to worry about. This sentiment remains true to this day, though now that the war has ended many question how long it will remain so.