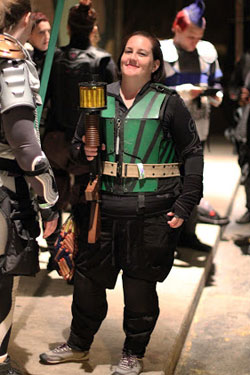 The following questions can be used to create a basic character history. Not every possible question is listed below, but the listed questions are provided as a solid framework in order to get started on creating a history. This outline is encouraged to be expanded upon before being submitted as a character history. Once the provided questions are answered, they should be emailed to the Eclipse staff. Not all questions must be answered, but a framework should be in place before contacting the staff in order to be eligible to receive a culture packet. As a reminder, if a player does not end up playing a character from that culture, the information in the packet is NOT to be carried over as common knowledge to a different character. Culture packet information is NOT common knowledge to the entire world.

Characters are required to have a character history on file before being allowed to take any Disadvantages. However, Disadvantages may be taken first, and remain, provided that the player submit the character history within thirty (30) days of the player’s first event as that character. Players are encouraged to submit character histories a full thirty (30) days prior to attending an event as that character. This makes things much easier for the staff, and it provides an additional three (3) character points! This is not a requirement, merely encouraged. It provides a player with much needed information about their culture and settlement.

Where do you come from?
Where were you born and where did you live before coming to the game location? The planet where you were born or where you lived has a significant impact on how you view the world and how you interact with others. Did you live in a settlement on Eclipse before now?

What was your childhood and youth like?
Your early years can have a significant impact on forming your personality. What were your parents like? Were you legitimate or a bastard? Did you have any siblings? How did you get along with your family? Did you have any formal education or training? How wealthy was your family? Were there any important or traumatic events in your youth that helped shape who you are today? Did you have a best friend or a group of people that you were often found with? When did you leave home?

Have you had any Romantic Encounters?
Romance can have a long-lasting impact on a character. Who was your first love? Has a lover ever betrayed you? Have you ever betrayed a lover? Have you ever lost a love? Are you currently in love? If a player is not interested in romantic stories, this is an excellent way to let us know ahead of time.

Do you have any enemies?
Long-term enemies can add a lot to a character’s history… not to mention potentially having the chance settle the score with them during a game. Do you have any long-term rivals? If you have an enemy, how did it happen? Enemies are rarely born from pure happenstance. Did you insult him in some manner? Did you best him in a fight? Was there a dramatic twist in a romantic entanglement? Is he an enemy of the family? Is a theft at the crux of the complaint? Does he just hate the way you look, and his friends don’t like you either?

What single event has affected you the most?
Was your family murdered by Marauders? Was your true love executed for treason? Were they then cloned by an evil geneticist and forced to spend years as a guinea pig? Did an Imperial noble spit on you as a child? Have you been imprisoned wrongly? How about rightly? Have you participated in a war? Were you captured and taken as a prisoner? Did a Tribe show you kindness? Was your planet destroyed by Thinking Machines from across the rifts of space? Was your mentor a victim of plague? Did Nidregg cultists use the entrails of your sister to perform a Working and summon a Warp entity to feast on her blood?

What adventures have you had?
What have you done since leaving home? Are you a soldier with no more war to fight? Did you grow up in a society that praised hedonism and begin crafting your own custom party pharmaceuticals at an early age? Are you a seasoned veteran of the civil conflicts between your people? Were you a member of a bounty hunter guild who was hired out regularly as extra muscle? Are you a pacifist who just wanted the fighting to end? Are you a technician who just adores the big, shiny, red button? Do you belong to the church of a deity you don’t really believe in? Are you seeking something? Are you part of an adventuring company? Were you sponsored by any government? Where were you during the Battle of Middian when the robots were defeated?

This section is provided to help players form a distinct personality for their characters.

What are your best qualities?
What do people admire about you? Is it your honor, courage, friendliness, or honesty? Do people respect the glossy regalness of your multiple sets of horn growths? Are you a philanthropist and a gift to your community? Do you defend your compatriots with a zealotry usually reserved for the clergy?

What are your worst qualities?
What are your bad habits? What are your vices? The ways in which you continually disappoint people might range from being a habitual gambler to being a wine-soaked drunkard, or perhaps a petty thief, or even being incapable of embellishing even the simplest of tales. Are you incapable of letting even the smallest insult go unanswered? Flaws are great ways to have a chance to improve in an emotionally tangible way over the course of your character’s career.

Do you have mannerisms or quirks?
Adding something that makes you, the player, have to perform something outside of your normal routine is an excellent way to get more in tune with a character. Does your character stroke his chin when in thought? Does she tilt her head to the side when angry? Does he tap his foot incessantly? Does she always scream a battle cry before engaging in combat? Does he refuse to look people in the eye when talking to them? Does she have an accent or unusual speech pattern? Does he have a phrase which he repeats in conversation?

What will you risk your life for?
What are your core principles and values? What friends or loved ones would you put yourself in a life-threatening situation in order to protect? Is it not people, but instead a possession? Is it the chance to earn fortune and fame? Is everyone equal, and open to your protection? Is it your settlement that invokes these feelings? Or is it nothing at all?

What action do you regret most?
Did you participate in the war? Commit a crime? Flee your planet in terror from the robot invasion? End a friendship? Slay a man for the first time? Report your love to the Church of Eheih for being a mutant? Perhaps you have no regrets.

What are your goals?
What your character wishes to accomplish in life can have a significant impact on his actions. Do you wish to rebuild the Great Houses of the Empire? Do you want fame and glory? Do you seek to understand the innermost workings of the very universe? Do you desire great wealth? Do you want to ascend in your organization to the upper echelon? Do you wish to spread the word of the glorious Church of Sundrav?